Today we will be discussing the top 10 manhwa where mc is op and has a system!

I handpicked all these manhwa titles and hope you will like reading most of them.

Here are the Top 10 Manhwa Where MC Has A System: 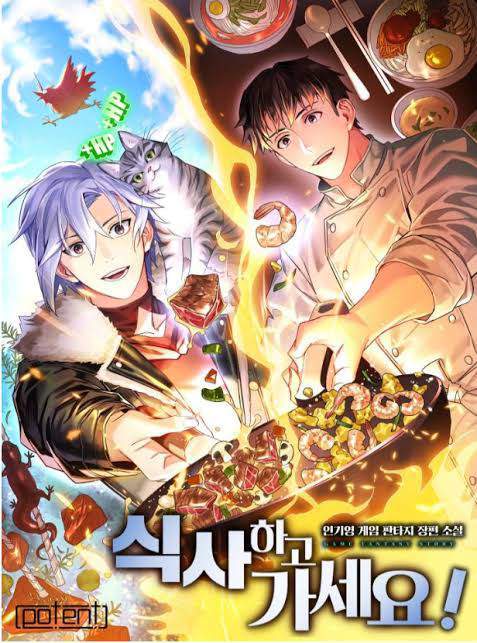 This is a new manhwa and it is one of my favorites.

Our main character was one of the best chefs in the world, but due to an accident he loses the sense to feel and the sense to taste.

And you know what that means.

This means, our main character’s career as a chef is over.

And because of that, he goes into depression for one whole year.

And one day, he gets a parcel in which he receives a VR game known as Real.

Everyone was discussing this game.

They were saying that you can touch and you can feel and even you can taste in this game because it is very realistic.

And thus, our main character tries this game.

This is the journey of how our main character makes things in the game and levels up.

This is a cooking adventure RPG manhwa.

This manhwa is very similar to leveling up by eating.

If you like that manhwa, then you are definitely going to love this one! Young-Han Hao learned that his innocent girlfriend turned out to be a rich man’s plaything after his misfortune.

When he realizes that his girlfriend had betrayed him and he thought that the heavens have abandoned him, at that moment he realized that he was blessed by a system.

Known as The Strongest System that is used for cultivating immortals.

At first, he doesn’t realize anything.

He thinks that he is going mad, but later he realizes that he has got magical powers.

He can also cure diseases and his powers and his physical ability skyrocketed from being a simp and a waste young man, he becomes an overpowered young man.

The art is decent.

This manhwa has 16 chapters and recently there was some news that this manhwa is going to be continued.

So that was the reason I included it in this manhwa list where mc has a system. This might be a Chinese manhwa but the thing that I like the most about this manhwa is that it has very long chapters.

This is a story about the adventure of Song Chen who is our main character.

He used to be a useless guy doing a hopeless job, all his life was about eating and playing boring games.

But one day, a powerful crystal brings the power of breaking the limit of normal people.

This power then combines into song chen’s body and then everything changes from being a boring guy to becoming the superhero of the world.

Song chen starts his journey with his new power.

The art of this manhwa is good and the story is also very interesting.

Our main character uses the system, completes missions and then receives rewards to level up. This is a manhwa which I like very much because the main character was not some overpowered deity in his previous life; instead, he was just a normal warrior.

This is the story of Tang Yoo Sung, a junior warrior who had no talent and had low level of training, died on the battlefield.

But when he opened his eyes and thought about what kind of underworld it was, he then realized that he had returned to his childhood.

This time, he is determined to change the future.

In his previous life, he was just a normal poor boy.

He didn’t have a golden spoon, so he could only train in lower level martial arts skills and at the age of 30 and 35 he realized that he only possessed mediocre skills.

But this time, he is going to change everything.

He also gets a system known as Murim Online and he has to perform missions in order to increase his strength.

So with his hard work and with the help of the system, he levels up continuously and becomes powerful! This manhwa started off very good but later it became a bit boring.

Yang Yu is a loser on earth, he can bear his hunger only by drinking water.

His parents were killed in a car accident and he lost a lot of money.

As a result, he went to a university but he was scammed by his girlfriend.

In despair, he decides to commit suicide.

But that also did not succeed.

At last, he blasts all his rage upon the sky and instantly there was thunder and he was killed.

Now, you might think that this poor man is too pitiful but like all the other chinese reborn stories, this guy yang yu was reborn again as a prince of the great Xia State.

But this prince was not some powerful guy, but he was killed by the schemes of the other princes.

Now, yang yu is reborn into the body of this prince along with a system.

And this time nothing can escape him and he decides to lead a domineering life. This manhwa is one of the most popular system manhwas!

And it also has more than 300 chapters.

Jiang Bai was killed in a truck accident when he was trying to escape from a high risk casino after winning a huge amount of money.

But instead of dying, his soul was transported into a parallel world that was similar to earth and merged with his alternate pathetic self.

Over there he meets the mad god who grants him a powerful bug ability in this new world.

Jiang bai is now stuck in his alternate world self who is far weaker and less influential than the original him.

Can he make a comeback in his new life in the parallel world with his new cheat abilities?

Well that is what you will know after reading this manhwa.

I can say that the art is average but the manhwa is very interesting.

After 200 chapters, it might get a bit boring but still it is a good one! Well you know what, I have mentioned this manhwa many times in my previous posts and the reason is this manhwa is very good!

After Medical Return, if I like any manhwa in the medical category then it would be Great Doctor Ling Ran

This is the story of Ling Ran whose goal is to become the world’s greatest doctor.

And one day, he suddenly obtains the golden finger system.

And this is a system with a high degree of medical expertise.

With the help of the system, he climbs up to the pinnacle of the medical world.

This manhwa has very beautiful art and not only that, but recently they did a mass release of 8 chapters.

This manhwa also has a light novel.

If you want to read it you can go to web novel and read it, it is very interesting.

Although I have not read the full light novel but still I have managed to read 200 to 300 chapters.

And this manhwa is very good for those people who are interested in the medical genre! The world was under attack by monsters that were pouring from the fracture.

And the hunters who hunt these monsters are one of the most coveted jobs in the world currently.

One day, Oh Yunsung who is our main character who works his hardest from day to day as a worker in a meat restaurant awakens an ability to automatically hunt

monsters with perfect techniques and physical prowess like in MMORPG when he presses the button Auto Hunting.

Now, this is a manhwa in which our main character gets a simple system.

In that system, he just has to click the button auto hunting on and the moment he clicks on that button he gets a whole lot stronger.

Now you might be thinking what is interesting about the story?

But let me tell you, he does not completely depend on the system.

Instead he works hard, trains his body and then he utilizes the power of the system.

The art of this manhwa is really beautiful!

You should definitely try this manhwa. Nano Machine is one of the most popular manhwa.

After being held in disdain and having his life put in danger, the orphan Cheon Yeo-Woon who is our main character has an unexpected visit from his descendant who inserts a narrow machine into his body.

Which drastically changes Cheon Yeo-Woon’s life after its activation.

This is the story of how our main character goes from being weak to becoming one of the most powerful martial artists in the demonic cult.

This manhwa also has a light novel, so if you have not read the light novel.

Or if you are getting more and more enthusiastic to know what is going to happen after finishing the last chapters of the manhwa, then you can definitely go and try the light novel.

The art of this manhwa is very beautiful, the story is also very interesting and we have a badass main character! This is also known as Ultimate Scheming System

This manhwa is one of my most favorite comedy manhwa.

Scamming all day every day after venturing alone, our main character bluffs to get the ultimate power in this cultivation world.

In simple wordings, our main character travels from earth to a different world.

Now, this world is full of cultivation but he is not alone.

He has got a system, now all he needs to do is to brag about himself and he gets points for that.

And using these points, our main character raises his cultivation and becomes too overpowered.

This manhwa is packed full of action, comedy, romance etc.

I can say that all of the emotions are in this manhwa.

The art is not god class, the art is just average.

But the story is very funny and interesting, I can say it is one of the best cultivation manhwas out there!